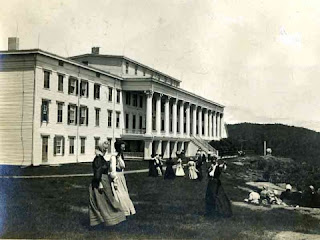 The Mountain House's site, the "Pine Orchard," had long been famous for its panoramic views up and down the Hudson Valley and even beyond to the east. John Bartram and James Fenimore Cooper had both written about it in different contexts.
Artists and writers had discovered the Catskills some time earlier. Shortly after it was constructed, the Mountain House and its surroundings became a favorite subject for Washington Irving and artists of the new Hudson River School, most notably Thomas Cole. Cooper advised his European audience, "If you want to see the sights of America, go to see Niagara Falls, Lake George and the Catskill Mountain House."

The hotel was built in 1823 and opened a year later by a group of merchants from nearby Catskill on a plateau with sweeping views of the Hudson Valley on one side and two lakes on the other side that provided water and recreation.
In 1839, Charles Beach, whose father ran a stage coach line from the town of Catskill to the Mountain House, leased the hotel from the owners for six years and then bought it outright. Beach rebuilt the Mountain House, changing the original Federalist design into a neo-classical structure.
at September 16, 2016