Where did the word "Catskill" come from? 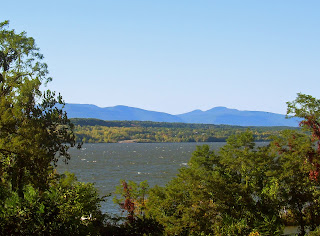 The name "Catskills" did not come into wide popular use for the mountains until the mid-19th century — in fact, that name was disparaged by purists as too plebeian, too reminiscent of the area's Dutch colonial past, especially since it was used by the local farming population. It may also have been a continuation of the British practice, after taking possession of the colony in the late 17th century, of trying to replace most Dutch toponyms in present-day New York with their English alternatives. The locals preferred to call them the Blue Mountains, to harmonize with Vermont's Green Mountains and New Hampshire's White Mountains. It was only after Irving's stories that Catskills won out over Blue Mountains, and several other competitors.
While the meaning of the name ("cat creek" in Dutch) and the namer (early Dutch explorers) are settled matters, exactly how and why the area is named is a mystery.
The most common, and easiest, is that bobcats were seen near Catskill creek and the present-day village of Catskill, and the name followed from there. However there is no record of bobcats ever having been seen in significant numbers on the banks of the Hudson, and the name Catskill does not appear on paper until 1655, more than four decades later.
Other theories include:
A corruption of kasteel, the Dutch sailors' term for the Indian stockades they saw on the riverbank. According to one Belgian authority, kat occurs in many place names throughout Flanders and has nothing to do with cats and everything to do with fortifications.

It was to honor Dutch poet Jacob Cats, who was also known for his real estate prowess, profiting from speculation in lands reclaimed from the sea.
A ship named The Cat had gone up the Hudson shortly before the name was first used. In nautical slang of the era, cat could also mean a piece of equipment, or a particular type of small vessel.
It has also been suggested that it refers to lacrosse, which Dutch visitors had seen the Iroquois natives play. Kat can also refer to a tennis racket, which a lacrosse stick resembles, and the first place the Dutch saw this, further down the river in the present-day Town of Saugerties, they gave the name Kaatsbaan, for "tennis court," which is still on maps today.
The confusion over the exact origins of the name led over the years to variant spellings such as Kaatskill and Kaaterskill, both of which are also still used.
at September 16, 2016