The Catskills and the Birth of the American Vacation
By Thomas J. Illari
CatskillCollecitbles.com 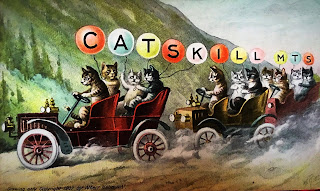 The Silver Brook House, The Dellwood, Eva’s Farm, The Grant House, The Prospect Park Hotel, The Saulpaugh, The Cold Spring Hotel, The Lox Hurst, The Grand View Hotel, The Maple Grove and The Central House. What do these names all have in common? They are just a few of the countless hotels and boarding houses that were commonplace throughout the Catskills. There was a time when the region was the summer vacation destination for thousands of city dwellers.  This era of tourism lasted an astounding 140 years from 1824 well into the 1970’s.

The need to feel that one needs to escape the city profoundly influenced the Catskills as a vacation destination. As the cities grew crowded and unsanitary in the 19th century, fresh air and clean water increasingly seemed like a good idea. By the middle of the 19th century doctors were beginning to state that it's important to get away for your health  - so much in fact that doctors prescribed it. Nature was the ultimate health tonic for city dwellers whose bodies were weakened by the demands of civilized life. One of the horrors of the American summers was malaria. The Catskills advertised as being free from malaria and to some extent that was true. The mosquito associated with the disease cannot, among other things, thrive were there a few people or cattle and it is rare to appear above two thousand feet above sea level.

In 1824 there is a little known turning point in the history of American tourism. This is when the Catskill Mountain House, America’s first grand hotel, was constructed on the lofty heights of Pine Orchard on a challenging but accessible rocky ledge of the American wilderness one hundred and ten miles from the fastest growing city in the West.  Not long after this event another significant one took place. The young Thomas Cole, later to be acknowledged as founder of the Hudson River School, travelled to the Catskills for artistic inspiration. While there he painted landscapes that aroused the attention of the New York City art scene. His paintings were displayed in a shop’s window for all to see. It was this significant event that spurred a legion of artists to follow on Cole’s footsteps and popularize the Catskill region through art. These events marked a milestone in the cultural development of the newly formed Country. From the Mountain House and the Catskills Mountains that enfolded it, there was recognition of the sublimity and beauty of the American wilderness. This new romanticized view of the landscape would soon help to bring throngs of tourists to the mountains.

It is also worthy to note the significance of writers who were influential in drawing the public’s attention to the Catskill region. First and foremost was Washington Irving when, in 1819, he published Rip Van Winkle to amazing success. This classic story takes place in the soon to be emerging Catskill region. After Irving was James Fenimore Cooper who described in great detail the region of Pine Orchard, the future site of the Catskill Mountain House, in his book The Pioneers which was published in 1823.  Descriptions of the Catskill region’s scenic beauty abounded in nineteenth century letters, literature and travel guides further enhancing the public’s recognition of the region as a tourist destination.

In the early and mid nineteenth century, a few scenic destinations became hot spots for tourism, most notably the Catskills and Niagara Falls. The Catskill Mountain House had great fame, but despite the popularity of the hotel few other hotels were built in the first 50 years of its existence; perhaps in fear that they could not compete with the majestic Mountain House. What did grow in the first 50 years were the more affordable boarding houses as an increasing number of tourists flocked the Catskill region.  Winter Clove in Round Top, New York began operations in 1838 (it is in still in operation to this day) and the Laurel House in Haines Falls in 1852. The first big competitor of the Catskill Mountain House was the Overlook Mountain House, which opened in 1871 on Overlook Mountain outside of Woodstock, NY.

Tourism started to become even more popular after the Civil War, thanks largely to the development of railroads and infrastructure improvements.  By 1879 the economic prosperity of the Catskills as a vacation destination spurred the growth of both the quantity and quality of boarding houses and the grand hotel boom of the region began.  In 1881 The Kaaterskill Hotel was opened with capacity for 1,100 guests, the Laurel House above Kaaterskill Falls was greatly enlarged, the Grand Hotel at Highmount was completed and the Catskill Mountain House enlarged with many additions. Depending upon the degree of luxury desired summer tourists had a large selection of options from basic boarding houses, cottages to grand hotels.

For the Catskill’s and Hudson Valley to gain recognition as the first vacationland in America one cannot discount the strategic importance of the region’s location and the river that runs through the valley below. The Hudson River played a vital role in allowing access to the Catskills; first by steamboats and later by rail along both of its shores. In the early 1850’s the Hudson River Railroad was established on the East shore of the river. By the early 1880’s six trains a day left New York City for the mountains.

The Catskills themselves became dotted with train stations from the Catskill Mountain Railway, the Ulster and Delaware Railroad and later The Otis Incline Railway. Prior to the railroads one could leave New York City in the early morning and arrive at Catskill late in the evening, a trip of eleven hours. Once the railroads were built the time was reduced to three hours. The results were immeasurable.

Until the post civil war period, the “Catskills” was restricted to the vicinity of general area of the Catskill Mountain House. It was not until the coming of the railroads in that the vacation region expanded South and West. The Borscht Belt, or Jewish Alps, is a nickname for the summer resorts of Sullivan, Orange and Ulster counties. These counties are Southwest of the Catskill Region of Greene and Ulster Counties.

The Jewish resorts were a popular vacation spot for many New Yorkers between the 1920s and the 1970s.  Although they ware associated with the Catskills, none of these resorts were within the Catskill Mountains. The term “Catskills” was used broadly at that time to describe a much larger region than the region geographically defined by the Catskill Mountains of Greene and Ulster Counties.
As New York City expanded and changed demographically, t
he Catskills were largely divided up into ethnic regions. There was the Irish Alps, the Italian Alps, the German Alps and the Jewish Alps and they became tremendously popular for the city’s expanding middle classes. By the 1950s, there were more than 500 hotels and 2,500 bungalow colonies and small resorts. 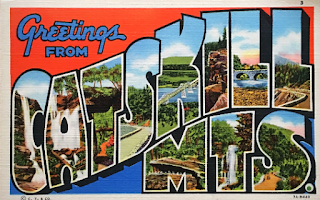 But as ethnicities assimilated the getaways catering to specific ethnic groups were no longer needed. Financial troubles started to plague some of the resorts, some of the old hotels became white elephants unable to upgrade and adhere to more stringent safety laws. Cheaper airfare travel allowed travelers to venture elsewhere. By the 1970s, sadly many of the Catskills resorts were closed, abandoned and left to decay. The area entered a long period of decline.


There is now a sense of rediscovery in the Catskills. The Catskills are experiencing an incredible renaissance in the travel and tourism market. It could be the result of an improving economy, people looking for a quick get away, or merely getting back in touch with nature. Whatever the reasons, there is currently promise, energy and momentum advancing the Catskill region into a resurgence long overdue.