Special Correspondence of the Register
THE CATSKILLS

A Trip the Catskill and the Laurel House  -

Having a short vacation, and desiring a relief from the cares of business, I concluded after due deliberation to make a trip to the Catskill Mountains. This being our first visit we were somewhat at a loss to make up our mind what particular locality to choose as our resting place, and being besieged on all sides by runners and agents innumerable upon arriving at Catskill, our ideas became confused for a time, but we came to our senses and concluded to take be advice of the gentlemanly agent of the Laurel House, and visited that particular resort.
We passed through the bustling throng of carriages of all kinds from an old style post coach to a rickety lumber wagon, and were on our way. Our conveyance was a splendid Concord coach drawn by four rattling steeds, driven by one "Tom," as we were informed, who knew his business as we soon found out, and was courteous and agreeable to all under his charge. 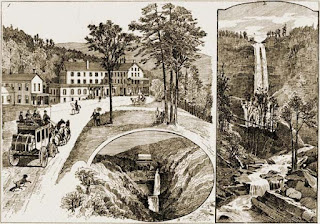 After leaving Catskill Point we arrived at Catskill village, a cozy business place situated on Catskill creek proper, where a halt was made for a few minutes to receive the mails and small packages for the visitors sojourning on the mountains (and it seemed to be the peculiar trait of the Laurel House proprietor to accommodate all in his vicinity, whether his guests or not.) We made a final start, but were somewhat disheartened at first on being informed that our ride would occupy four hours of valuable time which we imagined would be tedious and tiresome, but upon realization of the fact we were very much disappointed, and happily at that, and would have been better pleased had the ride occupied six hours instead of four, as our time was constantly occupied with new scenes from the
time of our departure until we arrived at the Laurel House.
After leaving the village of Catskill, which is situated on a bluff above the noble Hudson, and which contains many first class hotels, restaurants and private residences, we passed over a splendid road built years ago, ascending a ridge of land and lime rock which extends from Hoboken, New Jersey, to the St. Lawrence river, (as we are informed) falling back from the Hudson at places on its line north, and forming numbers of ridges with valleys equal in number clothed with verdure equal in appearance to any to be found, interspersed with numberless fine farm houses, with all necessary out buildings, the farms appearing to be under a good state of cultivation and the owners and occupants seeming to be joyous and happy. After a five mile ride we arrived at Glenwood, where a halt was made for rest, water, &c. A mile further on we halted at the place familiarly known as the Half Way House, where more refreshments for man and beast were obtained.
We then proceeded on our journey to the foot of the venerable Catskills, said at this point to be 1,000 feet above the tide waters of the Hudson.' Proceeding from thence we commenced the ascent of the mountain, which coupled with the invigorating air and the beauties of the scenery on either side and the valley below we forgot time. Arriving at the Rip Van Winkle House another halt was made, and upon enquiry we found we stood upon the identical spot where the venerable "Rip" was wrapped in slumber for twenty years. We viewed the spot and enjoyed the scene which we had often witnessed in drama presented to millions, by the artist, "Joe Jefferson." After a short halt we proceeded on, arriving at the summit where stands the Mountain House, we took a look at the valley beneath which is about 3,000 feet below.
Proceeding on, we soon arrived at the popular resort — the Laurel House — kept by mine host J. L. Schutt, and were received with kindness by the proprietor, the numerous guests of the house seeming to join in the welcome of our appearance.
Once within we were shown to a well furnished room where we were to make our headquarters during our brief sojourn, and after making a hasty toilet we were ushered into the spacious dining hall where a bounteous supper was provided with all that heart could wish and to which we did ample justice, as the air had sharpened our appetite to an unusual extent.
After satisfying our inward cravings, we proceeded to view the outside world by moonlight, and were well pleased and retired to our room, our rest only being disturbed by pleasant dreams of the future. In the morning we arose refreshed, and after our usual walk partook of a hearty breakfast, feeling invigorated in body and mind, and proceeded to take a survey of the place.
Now, Mr. Editor, we are no professional tourist, for if we were we would give you a description of the place, but suffice it to say, we have taken our meals and rest regularly since, and lost no Interest in the place; neither have we been misled by the proprietor or those in his employ. We cheerfully recommend the place to all tourists as being a quiet home with all the comfort of cool air, walks and drives.
The Kauterskill Falls are nature's wonder — the Infinite and finite are combined, holding the spectator with awe and reverence as he views the scene. No lovelier spot can be found, as we believe, on this continent. Gentle reader, if you think we are biased, we advise you to take a trip and satisfy yourself.
The proprietor will be found affable; and for quiet, secluded walks, for the comforts of home, for good substantial board and genuine human treatment we venture the opinion that it cannot be surpassed on the American continent.
The beautiful Kauterskill Falls are still unwritten. The first fall being 100 feet, the second, only a short distance below, being 80 feet, the fall being sharp and descending for some distance below, while the bluffs on either aide rising to the clouds to appearances. We would give the reader a general account of Sunset Rock, Prospect Rock, also of the general beauties of the scenery, fishing, &c. Suffice it it to say, we enjoyed ourselves, and as life is short, we advise, others to satisfy themselves, by obeying the scriptural injunction of 'Go then and do likewise.'