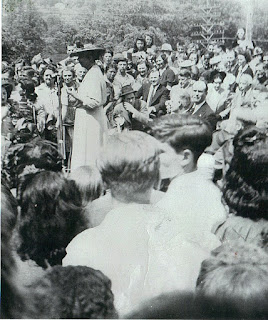 HYDE PARK, Friday—It rained all day yesterday in New York City, but I managed to do a number of errands and was able to leave for Hyde Park this morning at quarter of nine. I drove up very comfortably since there was comparatively little traffic coming out of the city. As I looked at the winding lane of traffic on the other side, I was rather glad that I was not going south or coming into the city to go to work.
The sun is shining again and everything looks beautiful. Two days of rain does give the countryside a grand washing, and everything in our little vegetable garden seems to have grown visibly.
We have only two hours here because, at 1:00 o'clock, we must leave for Catskill, N.Y., where I am to dedicate a camp which the public schools are inaugurating for the benefit of their pupils this summer. Then we shall drive straight to New York City, for I must be at the meeting of the Mother's Health Association of the Lower East Side at Cooper Union at 8:00 o'clock. Then I take a midnight plane for Chicago, on my way to St. Paul, Minn., and Miss Thompson goes back to Washington. This flying trip was an added reason why I was glad to see the sun come out this morning.

At the time there was a nationwide movement at the time to provide camps for children. The dedication in Catskill was part of an all-day program which included a forum in the Catskill High school auditorium.
Mrs. Roosevelt was attending to endorse the establishment of school camps provided under a congressional bill. The camp was located on West Main Street.