WALTON VAN LOAN, of Catskill, N.Y., publisher of the Catskill Mountain Guide, was born in New York City on January 8, 1834, son of Matthew D. and Julia A. (Thompson) Van Loan. His grandfather, Isaac Van Loan, a resident of Catskill, was a mason by trade, but was engaged for a long period as captain of a passenger sloop plying between Catskill and New York. Captain Van Loan died at the age of seventy-two. His wife, Jane Dies, who was born in Gilboa, died at the age of seventy-four. 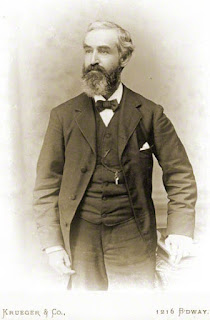 Matthew D. Van Loan was one of a family of four children. He was reared in this town and educated in the common schools. In 1841 he went to New York City and opened a daguerreotype studio, being the first man in the United States to make a business of producing portraits by the new process. He continued taking pictures for ten years in New York, and from there went to Philadelphia and later to Washington, engaging in the same business. Subsequently and up to the time of his death, in 1856, he was employed in the custom-house in San Francisco. Widely known as a daguerreotype artist both in this country and abroad, he took many prizes in American cities and was given special honors in England. While in New York he had a revolving gallery in the Delmonico Building, the only one ever known. His wife, Julia, who died at the age of seventy-seven, bore him three children, two of whom are living. These are Walton and Spencer. The latter, who was a soldier in the Civil War, resided in this village. Both parents were communicants of the Episcopal church, the father being one of the vestrymen.
Walton Van Loan resided in Catskill until he was twelve years of age, and then went with his father to different cities. For a time he attended the public schools in Philadelphia. When about thirteen years of age he secured an appointment as page in the national House of Representatives. This position he held from 1846 to 1850, receiving in payment sixty dollars per month in gold. In 1852 he went to California via Nicaragua to join his father, and paid his own fare. He carried a letter of introduction from Daniel Webster to the custom-house officials in San Francisco, and shortly after his arrival was given a position in the custom-house. But he remained in it only a short time, leaving to go as clerk in a large book store. After four years in that business he returned to Catskill and bought out a store, which he conducted for the next twenty years, up to 1878. In that year he started his present business, which has proved to be most successful. He has issued about thirty-six thousand guide books and about fifty thousand maps of the Catskills, taking in the entire chain. He is conceded to be the most reliable authority on points concerning the geography and topography of the Catskills, and no man in the country can approach him in the extent of information concerning this beautiful region. He has been to the top of nearly every peak in the entire range.
Mr. Van Loan was married in 1874 to Lucy Beach, a native of Michigan. He has now lived in Catskill for forty-three years, and in his present residence ever since 1862, when it was built. He is a member of St. Luke’s Church, and has the unparalleled record of having been its treasurer for thirty years. His wife is also a member of the same church, and both are active religious workers. The society has just completed a stone edifice, which was opened on June 6, 1899. This is said to be one of the most beautiful buildings to be found on the banks of the Hudson.
at January 09, 2018