The Canajoharie and Catskill Rail Road (C&C) ran from Catskill, NY to Potter's Hollow, NY. Originally it was intended to extend the railroad to Canajoharie, New York.
Chartered in 1830,it never achieved its intended goal of connecting its namesake villages. A ground breaking ceremony was held in 1831,but construction did not begin in earnest until 1836 when the route was surveyed by George H. Cook.By the end of construction a total of 26¼ miles of track had been laid.
The track consisted of wooden rails topped with strap iron.The track generally followed Catskill Creek, and the communities served included Cairo and Leeds. The first trains, consisting of cars hauled by horses, ran in 1839.The line's only locomotive, Mountaineer, began operation in 1840. It was never very satisfactory. The C&C carried both passengers and freight.[Commodities carried included iron, brick, wood, various agricultural products, and household goods including such items as candles, tea, salt, snuff and raisins.

On 4 May 1840 the High Rock covered bridge over Catskill Creek collapsed under the weight of the train, killing one Jehiel Tyler and injuring a number of others. This disaster is marked by a New York State historic plaque on Route 145, about two and half miles west of East Durham.
Following the bridge collapse, the line collapsed financially and was sold and scrapped in 1842.
The only known depiction of the railroad is Thomas Cole's River in the Catskills at the Museum of Fine Arts in Boston. 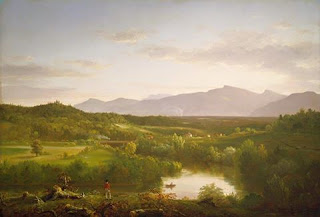