The Village of Catskill, established in 1806, is located just up the creek from this point. The low,
yellow-colored building near the tip of Catskill Point was once the warehouse where local farmers brought animals and produce for transport by ship to New York City. The nearby brick building, now an interpretive center for the Historic Catskill Point, was the Freight master’s building.
Next door to the Freightmaster’s Building, you can still see the ferry slip for those traveling across the river during the 19th century. Until trains were available in the 1850s, river traffic stopped during the winter months when the Hudson was ice-bound. 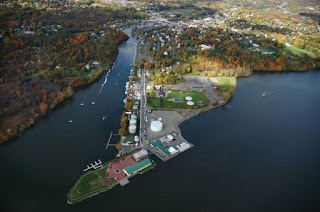