Built in 1880 as a roller rink the Nelida derived its name as an amalgam of the names of the wives of the owners, Nell Lampman and Ida Kortz. By the end of the decade it had been converted to a theater which housed plays, concerts, community events and movies.

On New Year’s Eve, 1917, a sellout crowd was present for a fundraiser. Shortly after the last people left in the early AM a fire was discovered in the basement. It was subsequently attributed to a defect in the recently updated heating system and the need to overcome the minus 12 temperatures outside.
The wooden building was quickly consumed also spreading to those on either side and to the rear. Seven buildings were destroyed, an estimated loss of $150,000. The $14,000 value of the Nelida Theatre was only partially covered by insurance. 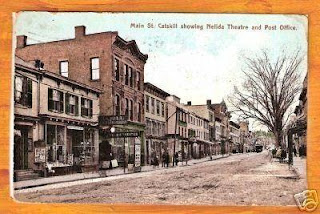 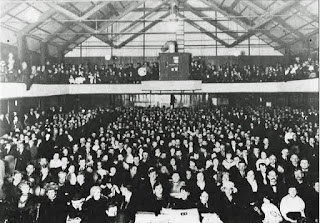 Other adjacent buildings also suffered damage.
The Community Theater is now on this site,
at September 16, 2016