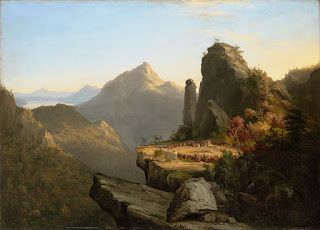 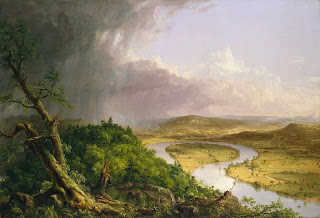 In sublime landscapes nature is shown at its most fearsome. There is an awe and reverence for the wild. Humanity is small and impotent in front of raging waters and violent storms. These works can also be uplifting, in a spiritual way. The sublime emphasizes God’s dominion over humanity. An example is The Catskill Mountain House: The Four Elements by Thomas Cole.

Whatever messaging or themes that may be present in these landscape paintings, most of Hudson River School artists had one common message to convey - morality. Despite their different styles and subject matter, their purpose was a common one. It was to preserve their new nation’s beautiful and natural scenes. They wanted to express man’s harmony with nature, and viewed their new country as a gift, a second chance for mankind to live in the new Eden of the untouched American wilderness.


As you view these 19th century landscapes it is of interest to think about how the artists have contributed to our view of the natural world and its significance in our lives even today. The era of the Hudson River School was complex. They created some extraordinary works leaving behind their vision of man’s association with nature. Almost two hundred years later their legacy continues and their revelations stand as strong today as it did when they first rambled through the Catskill Mountains in search for the sublime and picturesque.